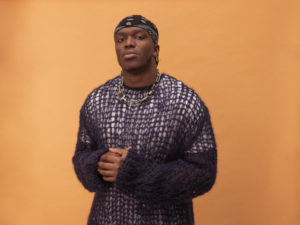 Olajide William ‘JJ’ Olatunji, known publicly as KSI, is one of YouTube’s biggest stars, chart topping music artist, and a professional boxer with a combined social media reach of over 39.46 MILLION.

KSI has two YouTube channels, (KSI & KSIOlajidebtHD) that have garnered over 28 million subscribers and over 6 BILLION views on YouTube alone. KSI possesses the third most-followed channel in Britain behind Ed Sheeran and One Direction.

KSI – which stands for Knowledge, Strength, and Integrity, has built his empire with the help of his infectious personality and quick wit, one of the many reasons why fans love him. Known for his music, gaming vlogs, reaction videos, diss-tracks, and challenge videos; he consistently delivers his fans engaging content.

Variety named KSI as the top influencer amongst US Teens, outranking household names like Taylor Swift, Johnny Depp, and crushing traditional TV/film and music stars. KSI has been featured in Forbes, Billboard, Esquire, The Hollywood Reporter, E! News, ESPN, Mirror, The Sun, and many more.

A talented music artist, KSI launched his music career with his first extended play, ‘Keep Up’ in early 2016, reaching #1 on the UK R&B Albums charts and the title track reached #10 on the Billboard charts, which were followed by EP ‘Jump Around’ and a third EP,  ‘Disstracktions’ and ‘Space’ in 2017. In April 2019, KSI released a collaborative album with UK rapper Randolph titled ‘New Age.’ KSI’s single ‘On Point’ (Logan Paul Diss Track) was released in 2018 and has garnered over 33 million views.

KSI is also a professional boxer. In February 2018, KSI competed in his first white-collar amateur boxing match against fellow YouTube personality Joe Weller. KSI won the match during the third round by way of technical knockout and was awarded the YouTube Boxing Championship Belt. On YouTube, the fight drew 1.6 million live viewers, 21 million views within a day, and over 25 million over the next several days, making it the biggest white-collar boxing fight in history.

In August 2018, KSI had an amateur boxing match against Logan Paul in the Manchester arena, selling out the 20K seat arena that broke the record of the most watched boxing match in history with 1.3 million pay-per-views. One judge scored the fight in favor of KSI and two judges scored a draw, resulting in a majority draw. The fight has been labeled “the largest event in YouTube history” and “the largest ever amateur boxing fight”.

Currently, KSI is training hard for his next highly anticipated professional boxing rematch, KSI v Logan Paul II, to be held at The Staples Center in Los Angeles on November 9th. It has been announced that WBO Super-Middleweight Champion, Billy Sandaurs, and, Devin Haney, who holds the interim WBC lightweight title, will both be defending their titles on the undercard. Their opponents will be announced in the next coming weeks.

In between training and creating content for his beloved fans, KSI is also hard at work in the studio. Fans can expect to see new music from KSI before the end of the year and into 2020.

For everything KSI & new announcements, be sure to follow: